MultiTrack 4.3 is now available on the App Store!

- New preamp gain knob, controls how much signal is sent to the IAA effects chain for each track.

- Effect Knob drag types (horizontal, vertical, or both). Initial setting is automatic (if you drag vertically, option will be set to vertical). Can be changed in the iOS Settings App.

- "Sound Copy" App Extension, converts audio to wav and copies to the general pasteboard from outside MultiTrack, including ogg files. http://forum.harmonicdog.com/viewtopic.php?f=2&t=2626

- MultiTrack now rotates 5 backups of a project. If anything goes wrong, the latest backup is loaded.

- Waveform previews are now built while recording, instead of after. No waiting for a lengthy preview build after long audio recordings.

- Bins and Regions are named by track and take number, or audiobus source port names.

- MultiTrack can now be launched into the background, when hosted from another app.

- Bluetooth A2DP and Airplay now works for iOS 10 devices (enabled in the Menu).

- Non-Exclusive solo, now you can solo as many tracks as you want.

- Select from the 3 different built-in microphones on newer devices.

Fixes:
Email bug when sending large files on certain versions of iOS 9.
Memory leak when recording with screen locked.
If the song project doesn't match the hardware samplerate, converters are placed around IAA plugins.
To prevent Audiobus disconnections, input ports are now pulled even when track is disarmed or song is closed. 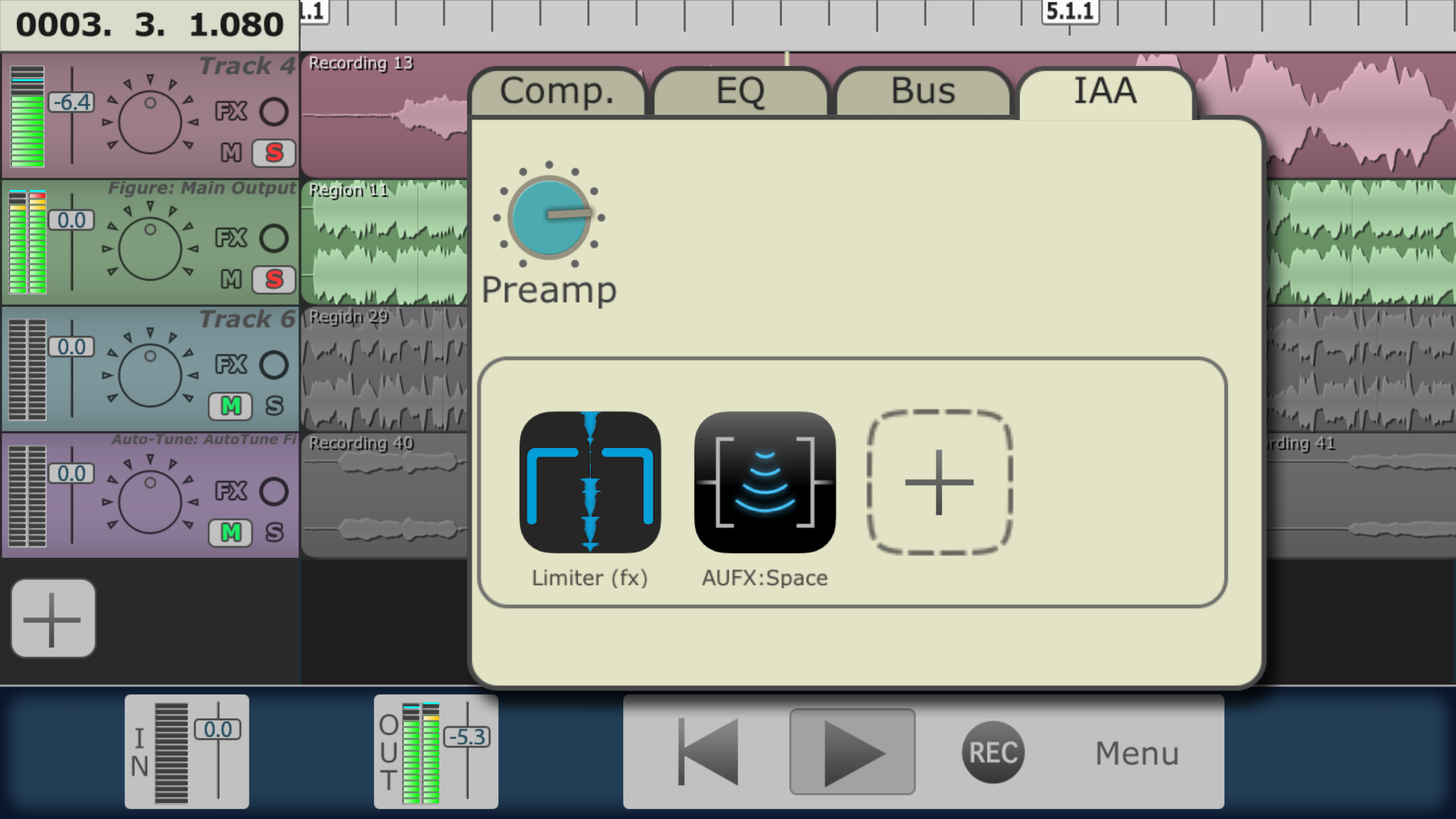 1. On the iPhone plus models (6+, 6S+, 7+) when 'Display Zoom' is ON in the Settings App, the display is zoomed in multitrack too much and unusable. The workaround currently is to disable Display Zoom in (Settings App -> Display & Brightness -> Display Zoom -> Standard)

2. mp4 and mov (video) files are not recognized for import for audio extraction.

There will be a point release to address these, if nothing else comes up I'll submit the release tonight to Apple. Thanks for your patience.

Please let us know if you experience any weirdnesses, but overall this release is looking very solid.

I think I found a bug. In your original post you mentioned that one of the new features of this release was: "Waveform previews are now built while recording, instead of after. No waiting for a lengthy preview build after long audio recordings." I upgraded and noticed that yes, after doing a long recording I no longer need to wait several minutes for the waveform to be displayed. However I recently did a 30 minute recording of myself doing a talk, and when I later opened the project in Multitrack DAW to do some compression I noticed as I was listening to it playing back that the waveform being displayed for the track didn't correspond at all to what I was hearing in my headphones. In other words, sometimes when I was talking loud the waveform was almost flat while other times when I was silent the waveform indicated significant sound. So I'm thinking perhaps adding this new feature has broken something with how waveforms are displayed in Multitrack DAW.

Thanks for the bug report. It looks like this is in fact a bug, it's happening with longer recordings. Specifically anything rendered out past the 16 millionth sample (16,777,216 to be exact) looks like it's grabbing the wrong data block for display. I'll have an update shortly that should address this. The good news is that the audio data is perfectly fine and the data for the waveform previews looks good, it's just a bug with the way it's being rendered so the waveforms shouldn't need to be rebuilt. Apologies for the inconvenience and thanks again for reporting it!

Just an update, version 4.3.3 released in April fixes the waveform graphic bug. Thanks for reporting!