This update includes a huge number of features:
AUv3 support for effects/instruments/generators with 2 window sizes, and presets support.
MP3 export using Lame, with command line in Settings.app
FFT with 7 coefficient Blackman Harris window in Parametric EQ screen, with decade lines.
Complete UI overhaul, with better visibility, highlighting buttons, and dynamic resizing.
Support for zooming tracks vertically. Track Header controls are resized and centered on the fly. VU Meters add segements and resize dynamically.
Support for Slide Over / Split View on iPad (iOS 11 or better)
Drag and drop from other apps / Files app. Drop multiple audio files directly onto tracks! With Snap Helpers while dragging. Regions/Tracks will be created if necessary, multiple dropped audio files line up vertically.
Support for portrait mode on iPhone with up to 15 tracks visible simultaneously on iPhone in portrait, 22 on iPad, 24 on iPad Pro.
Support for Emojis on track, song, audio, region, and folder names, in color.
Reworked Song Menu, with folders, new icons for zips and audio files, animations, MultiTrack projects are now (.mtdaw) packages.
Ability to drag audio/projects/folders and drop onto other folders, or hover over the folder to traverse into that folder, or hover over the Back button to traverse up the hierarchy, with animations.
Ability to preview audio files from the song menu (opens shared browser with play/import buttons)
WiFi web server reworked to look more like the song menu with better resizing. Ability to traverse folders from web interface.
Added 'Springiness' to track scrolling, this solves the bug of not being able to adjust the start handle of a region at zero. Now, edit the region as normal, use one finger to pull the window right and another finger to access the region start handle.
Added IAA/AU effects icons to tracks, these are untappable and indicate the current effects on the track. They mimic the IAA/AU effects panel and rearrange when effects are rearranged, with animations. This makes it easy to see the status of all your plugins at once, with loading indicators and error overlays.
IAA/AU effects panel now has 'No-Clip' unity gain control with VU Meter. If a plugin is clipping, turn this control down. The signal will be automatically boosted by the inverse amount after the plugin return.
'Follow' menu option added, now the automatic following of the playhead can be disabled. Follow is now slightly more aggressive and will follow even when looping.
Better CPU usage when nothing is happening onscreen.
Display of Beats/Time/Samples is now an optimized smearing number renderer (with glow).
Song Menu remembers all song / audio / folder icon positions, and watches the current directory for changes in case a file is dropped from iTunes File Sharing, WiFi server or Drag&Drop.
Localization for Japanese added.
And MORE...

Thanks for supporting MultiTrack. 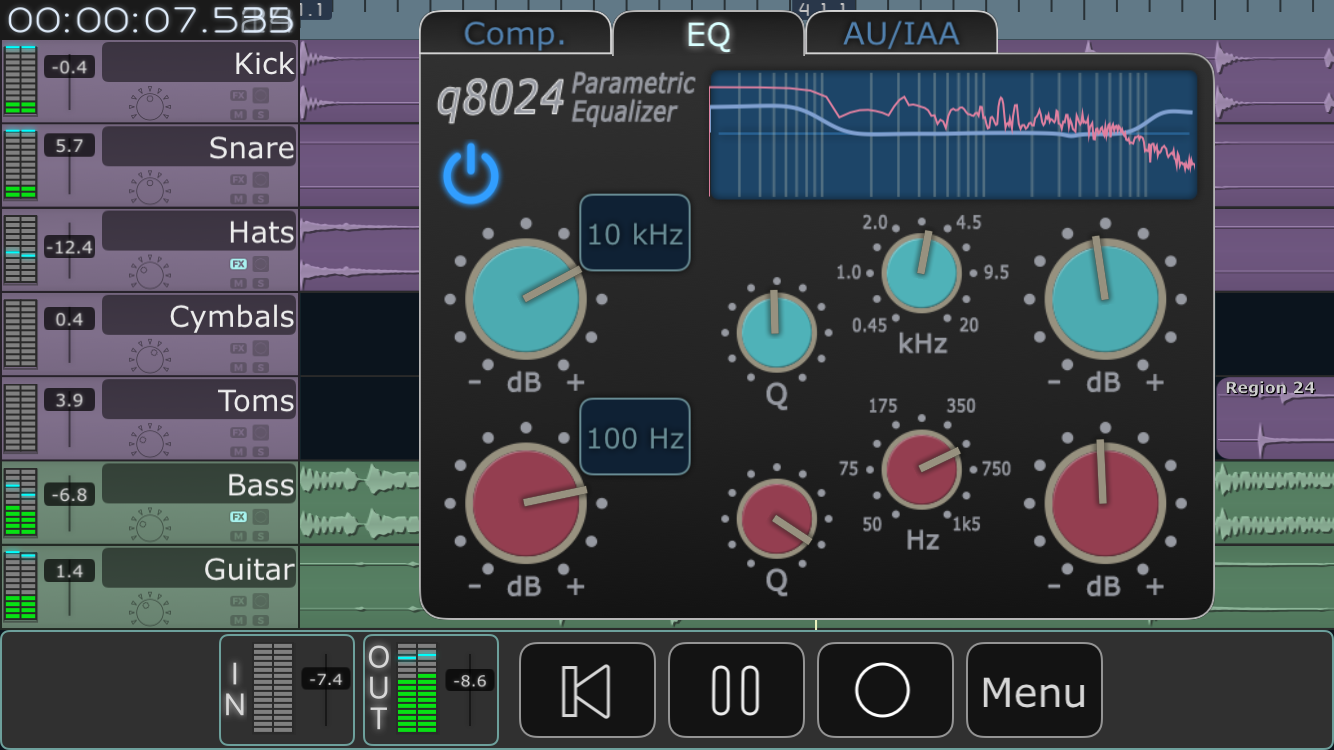 Wowsers! That’s a lot of improvements!

Wow! I simply refuse to believe this could’ve ever been a FREE update, so I immediately upgraded to 24 tracks though I very rarely use more than eight. A big thank you! Now I can finally get rid of my othet iPad DAW that I’ve needed purely for AU support

Awesome, thank you so much.

I don’t understand what this means. Please could someone explain.
Thank you
Top

Thanks for the kind words everyone. And apologies for not clarifying these features, several paragraphs should be written about each one. I'll do my best to fill in missing information.

FFT is a Fast-Fourier Transform, it's a frequency response graph, visible as the squiggly pink line in the parametric eq screen in the above screenshot, which you can use to see the energy present at each frequency to make better eq adjustments. The Blackman-Harris window is basically a filter run on the data before the fft to clean up the graph and smooth out the artifacts from buffer size truncation. The buffer size is 1024 points. Although there are many different types of window functions, the Blackman-Harris algorithm is a nice tradeoff between response and diminished sidelobes, and 7 points means to use 7 coefficients to get a more precise curve. Decade lines are the vertical lines seen in the graph that represent the logarithmic decades for eg. (10, 20, ..., 90) Hz but then it jumps to (100, 200, ..., 900) Hz, and then to (1000, 2000, ..., 10000), and the final line would be at 20000 Hz which is where the graph ends.

Thank you for the spectacular looking update! I look forward to digging in to it!
MTDAW is such a great tool!
Top