* New low price! Basic MultiTrack now comes with 2 tracks and with all features enabled. If you bought MultiTrack before this version, you will of course retain your track counts and all previous purchases.

* AudioUnit plugin view can be moved and resized, and remain onscreen. Supports multiple AU Instruments open at once on iPad.

* Extra FX bus added for a total of 2 FX busses.

* The large popup volume controls now have an easy to read VU Meter, and a Return To Zero dB button.

* AudioUnit icons on the tracks are now tappable, will open the Effects Chain popup for the track.

* Blue power dots on the Tab control to easily see which effects are on.

* OUT fader now visible in portrait mode on phones wider than 320 points.

Version 6.1
Feature: Multi-channel wav export. When mixing down to Stems and Wav export is selected, the option to render into a single multi-channel wav file will be available. Tracks will be rendered as stems and packed into the Wav file in the order they appear in MultiTrack.
Fixed an issue with frame layout when cold starting into splitscreen on iPad.
Fixed an issue with piano keyboard having '3 note sticky behavior' after opening the iOS keyboard for typing.
Fixed an issue that may have caused Stem normalization to have low volume level under specific conditions.
Fixed an issue when dropping a stack of audio files onto MultiTrack from the Files app, where downloading from iCloud would cause the files to be out of order.

Version 6.0.8
Fix a bug with AU selector where background panel would get dismissed if outside tapped point.

Version 6.0.7
Pin button. On iPad, AU plugins and instruments now have a Pin button to keep the plugin on screen. When opening a song, all pinned plugins will restore their position, so you can get right back to work from where you left off.
Plugin size and position is now saved separately for portrait and landscape views, or any other view sizes (iPad in 1/3 view, etc).
Fixed a latency issue with AU instruments/generators when a Bluetooth device was connected.
Mixdowns, bounces, and track freezes with AU plugins are now filled precisely the same way as normal playback, so should have identical renderings. (Playhead will move across the screen while rendering).
Fixed an issue when importing audio with more than 2 channels.

Version 6.0.6
32 bit floating point project formats! Use the '32f' option (Gear icon on the Songs Screen) to create a project with the new format.
Longer song and folder names (up to 45 characters)

Version 6.0.5
Replaces the 'Use Bluetooth' menu option with the standard iOS Route Picker (now in the OUT panel)
FIX: Disable mute/solo/power buttons until the loading/unloading of AU chain is finished.
FIX: The AU plugin icon spacing was wonky on smaller screens.
FIX: Save the project even when the only change is a region rename.

Version 6.0.4
Adds animating arrows on the AUView resizing button, to help clarify that the button needs to be dragged to resize the plugin.
Song/Folder archiving is now cancelable during the archiving process.
FIX: Better default size for AUView plugins.
FIX: Progress bar is now modal.

Version 6.0.3
FIX: Some weirdness with the Delay effect.

Version 6.0.1
FIX: A crash bug when trying to send a song as email on specific devices.
FIX: A rare crash bug when retrieving the plugin name from the AVAudioUnit.
FIX: The Hotbox button size and distance on iPad was a bit out of wack.
FIX: Save the project even when the only changes are track renaming.
FIX: Defer system gestures on bottom edge only when AudioUnit instrument or midi keyboard is onscreen. 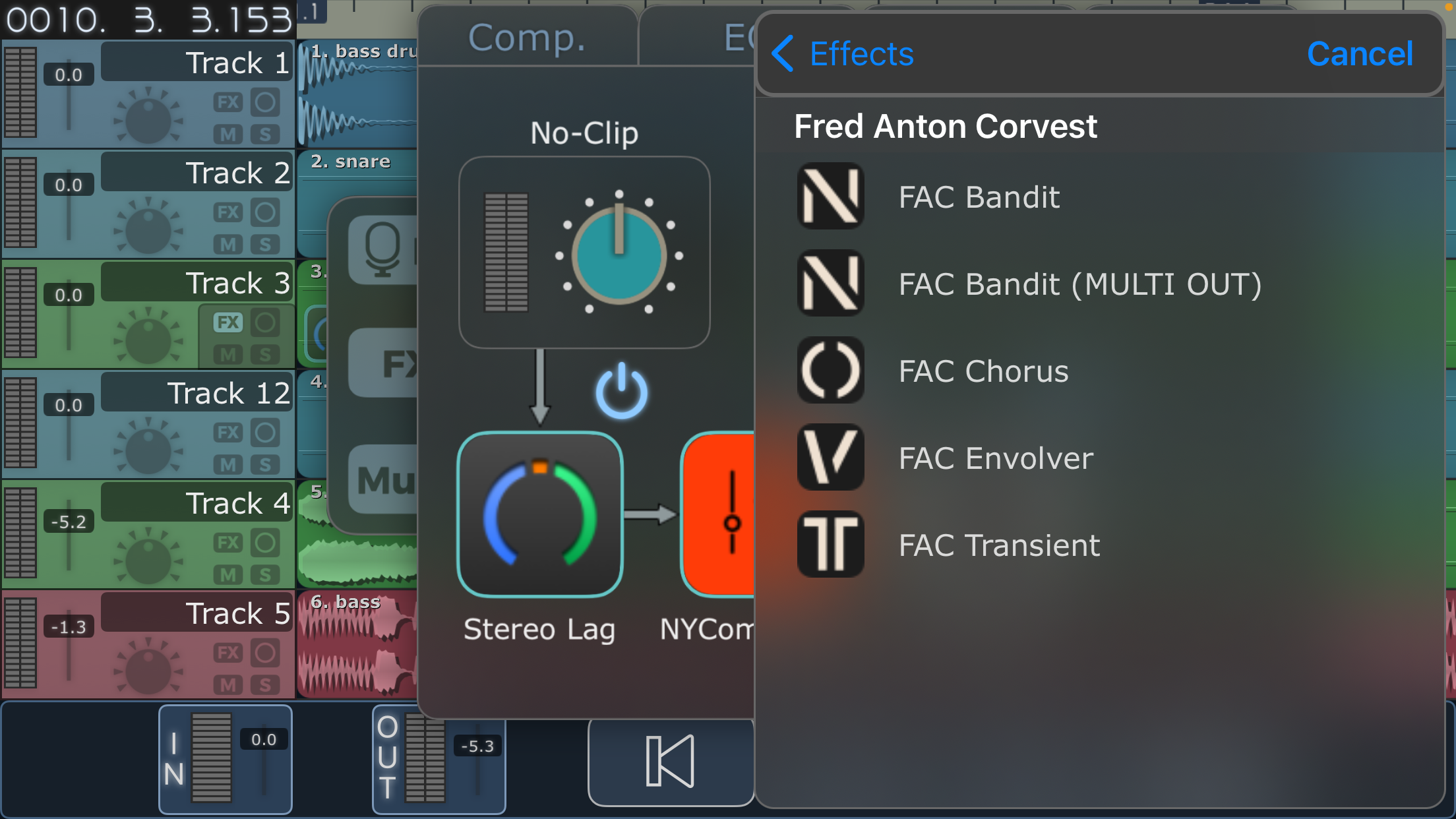 Hello....love Multitrack! Love the updates!....love the 2 buses....ping pong delay is great like this....however...when I use the Eventide Rotary app in the audio bus....the screen will not display fully. I tried every which way...I’m sure you will get it fixed...you’ve been great about keeping this running optimally.....also, I haven’t tried any other apps in the audio bus so far today...thank you for a fantastic product

I'll add this to the in-app help file as it's a little unintuitive, but basically you can resize the Plugin View manually to any size you want now. Use the upper right 'arrows' button and drag it around. You can also grab the title bar of the plugin view to move the whole window. MultiTrack will remember your exact view setting for each plugin.

Was hoping to have little animating arrows that pop up when tapping the button, like on the Spinner controls in the Metronome and EQ, but had to get the release out.

And thanks for the kind words! 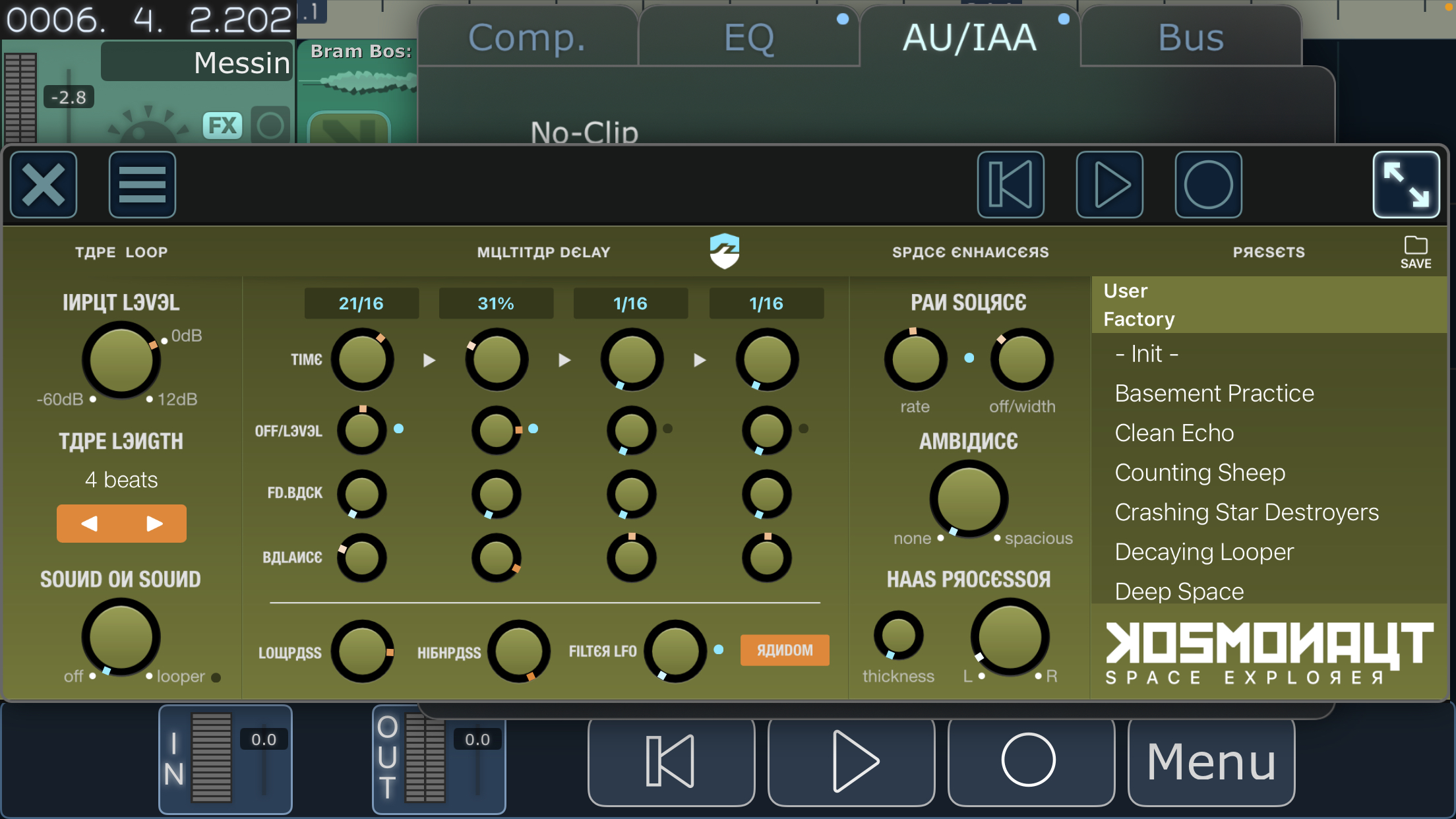 Ok....cool. I was just tapping on it like always. Thanks. And I love the new look of it all.
Top

Really liking the update. Thanks.
Top

32 bit float question. Is there a way in the App to adjust the track gain after it’s recorded? Or do I have to download the project to a desktop program such as reaper to do track gain adjustments?

Great app been using for a long time. And I love 32 bit float but have generally used it with the tentacle Track-e ….

Unfortunately not. But it's possible to Solo the track and do a mixdown, which will be normalized, then copy the mixdown back onto a track and delete the original. This only gives you normalization, but I can't think of another volume level that is better than the maximum volume level possible before clipping. With float, this would be a value of 1.0. Although it's a bit of work, it's probably more work to export the project, do the volume adjustments then reimport the modified tracks.

If you choose to go this route, make sure to disable all FX on the desired track, set Bus Sends to zero, and disable Master FX, solo the track and pan to center, and mixdown to Wav at the project samplerate. The resulting normalized audio will appear in the Shared tab, Copy it from there and paste onto a track.

I've been considering some destructive editing features on the Bins such as phase inversion and now volume adjustment, thanks for the feedback.

A clarification: MultiTrack normalizes to 0.5 dB below Full Scale. Also, the original track needs to be at least 1/16th FS to get normalized at all, so if it's a very weak recording you may have to boost up the track volume before mixdown (master volume has no effect on mixdown)