iPad USB:
The iPad (1, 2, and 3) can use the Camera Connection Kit to connect USB devices. The iPad 4 should use the Lightning to USB Camera Adapter. Any USB audio device which is full-speed USB class-compliant should work, but if the device draws too much current a powered USB hub is required. We have tested the following devices:

Mono only guitar interfaces:
Apogee JAM (not for iPod)
iRiffPort

These products use the headset input port and will work with all Apple devices. The problem with the headset input is that it is mono only, and also suffers from a major bass rolloff (150Hz and below). There is also crosstalk from output to input, so when monitoring tracks the mic tends to pick up the signal as bleed into the recording.

Sounds a little thin for vocals, and crosstalk is a major issue (especially a high transient sound like a click track) 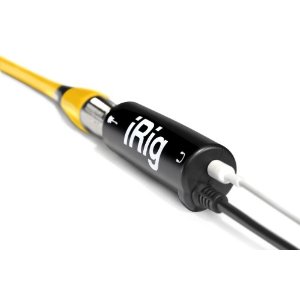 Can be used for recording guitar, but recommended to use a extra headphone amplifier to reduce crosstalk (It has a lot) 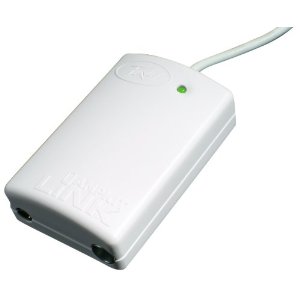 Great for recording guitar. Has active circuitry to reduce crosstalk so it takes a couple AAA batteries. 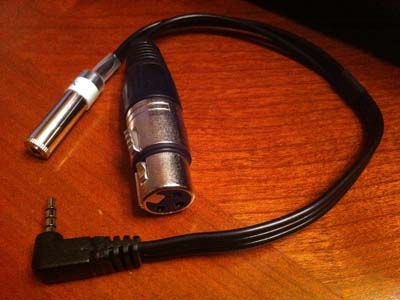 This one is good for connecting a non-phantom powered mic which has an XLR plug. We tested this adapter with a Shure SM57 dynamic mic and a Audio Technica AT801 mic and it works, but with the same crosstalk problems and lowend cut that the headset input port exhibits. Cost is $23.50. Please see the companies web site for a variety of connectors.

A much better alternative than the above headset port interfaces, is to use a Doc connector mic/interface. This connector has a stereo line input/output without any EQ or other nastyness. These are analog inputs/outputs. For these older models (3GS and earlier, iPod 3rd Gen and earlier) a number of them are available and the prices are quite cheap now: 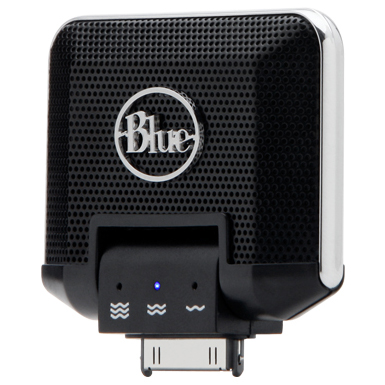 
Blue Mikey ver. 2
Sounds awesome. One of the best mics for general recording, and doesn't clip out on louder sources like the Mikey version 1. Has a USB passthrough so you can sync/charge while connected. This product is highly recommended. 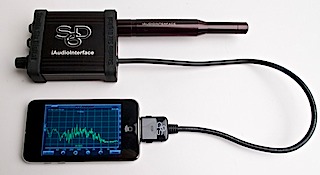 The iAudioInterface is probably the highest quality doc connector solution for Apple devices. Works on any device that has the line inputs/outputs on the doc connector (iPhone 2G, 3G, 3GS, iPod 2nd, 3rd). Provides calibrated stereo inputs and outputs, as well as a calibrated microphone suitable for FFT analysis and tuning a studio space. Uses stereo 1/4" jacks so be prepared to hit the local radioshack for some adapters. 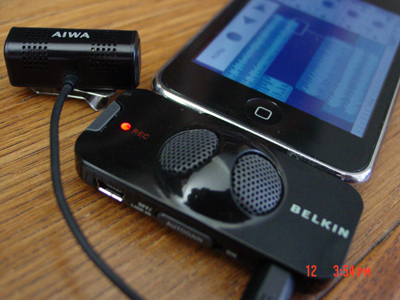 Works with MultiTrack for recording in stereo and provides a stereo line in as well. Seen pictured here with a stereo AIWA mic we had laying around the studio. It can handle some fairly large pressure levels. Actually too large. With the 'autogain' switch set to off, the signal level is very small when playing loud and close by on an acoustic guitar. This makes the internal mics practically useless for general studio work. It has the autogain function to compensate for the lack of volume, but autogain is never to be used for professional recording. Even though the input was way too low, it sounds good and has a full response. It does function well as a line input. 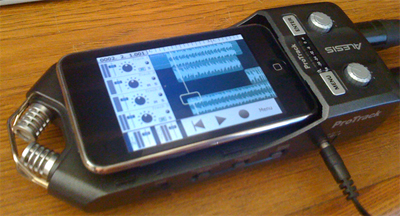 As it is now, it can be used for recording, but to monitor the previously recorded tracks you must plug in headphones to the iPhone/iPod instead of the ProTrack. This is because the ProTrack doesn't support full duplex audio. What this means is, with the hardware input monitor right there on the ProTrack, which has zero latency, can only sit there idle during a recording. OR, you can use the hardware input monitor, but not hear the playback of the other tracks through the headphones. It's frustrating that Alesis decided to not support full duplex audio and maybe the next version of the ProTrack will have it.

The good news is that you can still use the headphone output on the iPhone for monitoring and the ProTrack for recording in stereo, with minimal latency imposed by MultiTrack. If you have an iPod touch, you'll need to get a dock extender so the headphone outputs can be accessed. We've had good luck with the one from http://www.buyijet.com/extenders/iexten ... black.html

Built-in microphone
The built-in microphone on iPhone 3G and 3GS, sounds surprisingly good and is always available in a pinch. The 3GS has pretty major bass cut though, so recording a bass isn't going to sound great.


Apple Headset
These come standard on the iPhone and iPod, and feature a mono microphone and stereo headphones. The mic is built into the push button switch and is very small, but it sounds fairly descent.

I was really surprised when I first tried the built-in IPhone mic. The sound spectrum was decently balanced, and the overall level did not introduce as much of a noise floor as I had imagined. To get down a quick idea for a song, definitely useable.

If the push toward multitrack recording on the iPhone conitunes to gain momemtum, someone is bound to produce a hardware mixing dock that holds the phone in landscape mode, don't you think? Every time I am fooling around with recording on my iPhone, I keep imagining this small hardware mixer with multiple inputs, gain, phantom power, etc. and a thirty-pin connecting dock for the iPhone. Just has to happen.
Top

I'm using a 32gig touch version 3.1.1. I've tried the A/V cable and it doesn't work. The only way I can get multi Track to work is with the Apple headset/mic. I tried loading the mic cable with a 150 ohm dynamic mic and still nothing. Is this because it is no an iphone? Does the volume adjuster on the headset need to be compensated for on the touch input? Any suggestions would be appreciated.
Top

Keith wrote:I'm using a 32gig touch version 3.1.1. I've tried the A/V cable and it doesn't work. The only way I can get multi Track to work is with the Apple headset/mic. I tried loading the mic cable with a 150 ohm dynamic mic and still nothing. Is this because it is no an iphone? Does the volume adjuster on the headset need to be compensated for on the touch input? Any suggestions would be appreciated.

Hi Keith - take a look at faberacoustical blog for some more information on getting this to work. My initial tests using a 1K resistor worked with the microphone I tried, however it sounds like 128 ohms might be too low of an impedance on that mic. Here's a link to more information:
iPhone Headset Input Options

Has anyone checked out the Logitec microphone? http://www.geekstuff4u.com/logitec-lic- ... odule.html
Top

Does the input volume slider actually control the analog mic input gain, so that, for instance, a loud sound source that distorts can be recorded without distortion?

jbrave wrote:Does the input volume slider actually control the analog mic input gain, so that, for instance, a loud sound source that distorts can be recorded without distortion?

Unfortunately no. When the microphone itself clips, there is really no way to avoid distortion, other than using another mic which supports larger sound pressure levels.

Keith, sorry for the delayed response. I have not used that device. Ships from Japan, right? (I don't think anyone in the States has the device.) Anyway, $135 American seems pretty steep just to get input into the iPhone. Also, note that the input is X-Y, meaning stereo, so I am not sure how the current monaural recording of MultiTrack would handle this type input coming from a stereo signal routed from the 30 pin dock connector.

Of course, this will be a moot point whenever the MultiTrack 1.1 version comes online, hopefully in December, which should be stereo capable if developer plans for this update are realized.
Top

Does anyone know the impedence or levels of the dock connector
audio ins and outs? Is it just as easy as making a dock connetor cable to xlr's or whatever?
Top

Keith wrote:Does anyone know the impedence or levels of the dock connector
audio ins and outs? Is it just as easy as making a dock connetor cable to xlr's or whatever?

There's also links on that site for ordering connectors.

It seems it's just a typical high impedance line input, low impedance line output, but I've never tried to hook anything up to it yet. Wish I had more time to play with things like this, I'd make a direct box for the iPod/iPhone with phantom powered xlr's.